Castor oil is a vegetable oil obtained by pressing the seeds of the castor oil plant (Ricinus communis). The common name “castor oil”, from which the plant gets its name, probably comes from its use as a replacement for castoreum, a perfume base made from the dried perineal glands of the beaver (castor in Latin).

Castor oil is a colorless to very pale yellow liquid with a distinct taste and odor once first ingested. Its boiling point is 313 °C (595 °F) and its density is 961 kg/m3. It is a triglyceride in which approximately 90 percent of fatty acid chains are ricinoleates. Oleate and linoleates are the other significant components. 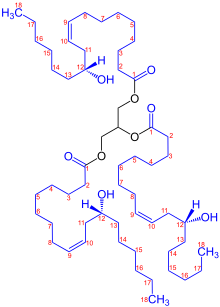 Structure of the major component of castor oil.

Castor oil is well known as a source of ricinoleic acid, a monounsaturated, 18-carbon fatty acid. Among fatty acids, ricinoleic acid is unusual in that it has a hydroxyl functional group on the 12th carbon. This functional group causes ricinoleic acid (and castor oil) to be more polar than most fats. The chemical reactivity of the alcohol group also allows chemical derivatization that is not possible with most other seed oils. Because of its ricinoleic acid content, castor oil is a valuable chemical in feedstocks, commanding a higher price than other seed oils. As an example, in July 2007, Indian castor oil sold for about US$0.90 per kilogram (US$0.41 per pound) whereas U.S. soybean, sunflower and canola oils sold for about US$0.30 per kilogram (US$0.14 per pound).